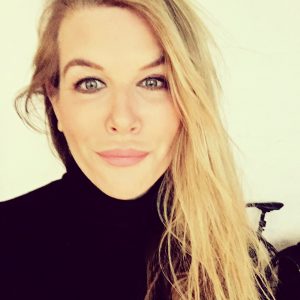 Studying philosophy, literature and art history at universities in Cologne and Munich with university degree (M.A.), I often found myself next to a pile of art books when at the library. Life brought me to Berlin in 2013. There I live and work in my atelier in Kreuzberg.

In most cases of my work, in which the scenes are multi-figured, each of their compositions depends on a closely managed underpainting, the forms of which are rhymed and behave to create the effect of a wide candy-colored tessellation. Within the discourse of painting, it is my ambition to contribute a voice that transforms literary and philosophical references into a new language that is emphatically feminine and defends the aesthetics of pain. Oscillating between almost always two and three figures, my pieces play consciously with awareness and visibility. It is teeming with quotations. The relationship of the individual to the family, that is, to childhood in particular, is a main theme of this artist, whose work is a dramatic-poetic appeal to transcend boundaries in the head – best with a bold leap – and a too rigid concept of reality. The motive of the child, which inhabits changing, spatially indeterminate scenarios, comes to us strangely lost, as she crouches in the picture. No, nothing but light and airy, as the first glance, the pictures are not, rather of partly abysmal ambivalence – primed by deep sadness. My work orbits around the objects in our lives: a painted autobiography, but not in the conventional sense. A mental, imaginary autobiography. A disease report as the poetry of a suffering.